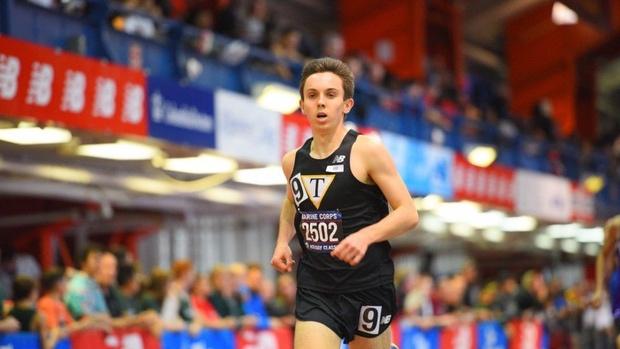 After nearly two decades of coaching, he says, he can project whether his runners are ready for their career PRs or not.

So that's why he believes sophomore Brenda Balthis has a great opportunity to PR on Saturday when he lines up in the prodigious field at the New Balance Indoor Grand Prix Junior Mile at the Reggie Lewis Track and Athletic Center in Boston.

"This is the kind of race you can either capitalize by being pulled by the pack or not," Costagno said. "And I don't think this race is going to be a slow tempo."

"It's the fastest race I've ever been in," he said. "I'm looking at the entry list, and I see some of these seniors who are headed off to college. I can already tell the separation, but my goal is to run a fast race hang on as long as I can and try to PR."

It's an important race for the sophomore, if only because he's one of the few underclassmen in the competition.

He's been given a chance to run with a field that consists of some of the best runners in the nation, including La Salle Academy (RI) senior DJ Principe, Cardinal Givens (NC) senior Connor Lane and Bishop Shanahan (PA) junior Josh Hoey.

Principe is the most accomplished of any runner, having earned a U.S. No. 1 4:00.97 effort, the third-fastest high school 1-mile run of all-time, last week at the New Balance Games in New York.

La Salle Academy assistant coach Bill Myers told MileSplit Rhode Island on Wednesday that Principe will not be moved up to the featured New Balance Mile.

Instead, the Stanford signee may even take the foot off the gas just a bit, considering the field's next best runner is Bishop Shanahan's Hoey, who clocks in a PR of 4:11. Myers said he thinks Principe will clock in around 4:06 to 4:08.

But Principe could very well pull along others for their best times of the season.

Costagno thinks Balthis can shatter his previous best time by simply following the field through 800m and then pushing through over the next half mile.

Balthis is coming off a solid performance at the Yale Track Classic 3K, where he ran a career-best time of 8:51.80.

"We've very excited about this one," Costagno said. "I've had five athletes in this race in the past few years ,and I know what this experience is like for these kids."

Balthis says he isn't getting ahead of himself. His goal is to remain focused and move with the pack, hopefully going with them as long as he can hold on.

"I like to think of my myself as versatile depending on how the race goes," he said. "If it ends up needing me to kick, or if it has to rely on my strength, I would like to say the I could do both."

To connect with Milesplit Content Producer Cory Mull, follow him on Twitter @bycorymull. Have a story idea? We're all about those. Email him at cory.mull@flosports.tv. To have access to year-round stats, breaking news, stories and videos, register for Milesplit Delaware here.